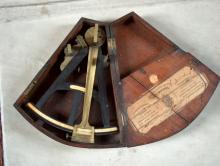 Owned by Leonidas Palaskas, the fist director of the Greek Marine school, founded in 1846.
Octant, like sextant was used by sailors to determine the position of the ship by measuring the altitude of the stars. Special filters allow sun observation