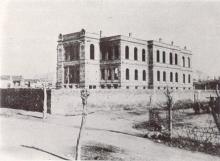 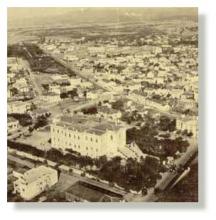 The town of Dede-Agats was founded by the Ottoman Empire in 1878 at the western part of Thrace. Soon, a Greek gymnasium has been founded in that town and in 1885 a Greek Girls’ school (Parthenagogion).
After the Balkan wars, the town was conquered by Greece (May 14, 1920) and its name became Alexandroupolis. A college for training elementary-school teachers (Didaskaleion) has been founded in 1923. Its first director was Theodoros Kastanos, from the island of Chios.

This school, as well a boarding house and an elementary school, were housed in a wooden building at the center of the town. The actual building was under construction when the Ottomans left the town in 1920, to become either a military school, either an agricultural school or an hospital. In 1923, construction was continued once again, this time in order to house the Didaskaleion. After many difficulties, the building was finished in 1930, and in 1930-31 the Didaskaleion was transferred there.

From 1934, a new institution for training elementary-school teachers has been created, the Paidagogiki Akademia. Decree 6042 of 1934, founded the Zarifeios Paidagogiki Akademia of Alexandroupolis which replaced the former Didaskaleion of that town. This Paidagogiki Akademia has been called Zarifios due to its financing by the legacy of Georgios Zarifis (1806-1884). Zarifis, a Greek banker of the Ottoman Empire, had financed Greek schools at Constantinople and Philipoupolis. After the Balkan wars, the Zarifeion School of Philipoupolis has been closed by the Bulgarian state and the legacy of an annual amount of 25000 golden French Francs was transferred to the school of Alexandroupolis in 1934.